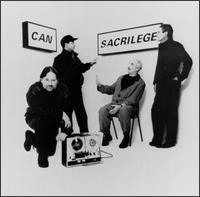 Always at least three steps ahead of contemporary popular music, Can were the leading avant-garde rock group of the '70s. From their very beginning, their music didn't conform to any commonly held notions about rock & roll -- not even those of the countercultures. Inspired more by 20th century classical music than Chuck Berry, their closest contemporaries were Frank Zappa or possibly the Velvet Underground. Yet their music was more serious and inaccessible than either of those artists. Instead of recording tight pop songs or satire, Can experimented with noise, synthesizers, nontraditional music, cut-and-paste techniques, and, most importantly, electronic music; each album marked a significant step forward from the previous album, investigating new territories that other rock bands weren't interested in exploring.

Throughout their career, Can's lineup was fluid, featuring several different vocalists over the years; the core bandmembers remained keyboardist Irmin Schmidt, drummer Jaki Leibezeit, guitarist Michael Karoli, and bassist Holger Czukay. During the '70s, they were extremely prolific, recording as many as three albums a year at the height of their career. Apart from a surprise U.K. Top 30 hit in 1978 -- "I Want More" -- they were never much more than a cult band; even critics had a hard time appreciating their music.

Can debuted in 1969 with the primitive, bracing Monster Movie, the only full-length effort to feature American-born vocalist Malcolm Mooney. 1970's Soundtracks, a collection of film music, introduced Japanese singer Kenji "Damo" Suzuki, and featured "Mother Sky," one of the group's best-known compositions. With 1971's two-record set Tago Mago, Can hit their visionary stride, shedding the constraints of pop forms and structures to explore long improvisations, angular rhythms, and experimental textures.

When the band split in 1978 following the success of the album Flow Motion and the hit "I Want More," they left behind a body of work that has proven surprisingly groundbreaking; echoes of Can's music can be heard in Public Image Limited, the Fall, and Einstürzende Neubauten, among others. As with much aggressive and challenging experimental music, Can's music can be difficult to appreciate, yet their albums offer some of the best experimental rock ever recorded. ~ Stephen Thomas Erlewine, Rovi