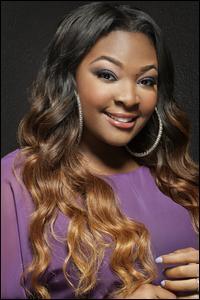 An R&B and gospel vocalist, Candice Glover is best known as the winner of the 12th season of Fox's reality vocal competition American Idol. A native of Beaufort, South Carolina, Glover began singing in her church, where her father was a pastor. After graduating high school in 2008, Glover attended the Technical College of the Lowcountry and University of South Carolina, Beaufort. She previously auditioned unsuccessfully for seasons nine and 11 of American Idol before making it onto the show in 2012. On May 16, 2013 Glover won first place in the competition, beating runner-up Kree Harrison. Her debut single, "I Am Beautiful," was released the same day. In February 2014, Glover released her debut album, Music Speaks. ~ Matt Collar, Rovi