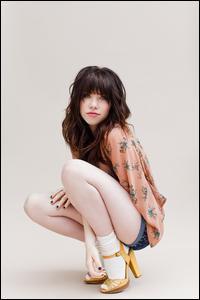 Canadian pop star Carly Rae Jepsen spent her formative years absorbing pop culture in her hometown of Mission, British Columbia. Her third-place finish in the 2007 season of Canadian Idol resulted in a recording contract with Fontana and Maple music, as well as a spot on the requisite Top Three concert tour, and by 2008 the young singer/songwriter had released her debut LP, Tug of War, which featured the single "Sunshine on My Shoulders," a cover of John Denver's 1974 hit ballad. Three years later, Jepsen released the single "Call Me Maybe," which drew from dance-pop and disco and attained worldwide commercial success. The Curiosity EP, her second major release, followed in early 2012. Also in 2012, Jepsen released her second full-length album, Kiss, featuring duets with both Owl City and Justin Bieber. ~ James Christopher Monger, Rovi