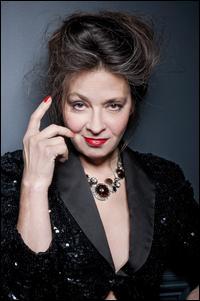 Catherine Ringer is a French singer best known as the frontwoman of Les Rita Mitsouko, an influential pop/rock duo that broke through to mainstream success in 1985 with the smash hit "Marcia Baila." She made her solo album debut with Chante les Rita Mitsouko and More à la Cigale (2008), a live CD/DVD released a year after the death of her duo partner, guitarist Fred Chichin. Born on October 18, 1957, in Suresnes, France, Ringer studied dance during the '70s and was also active as an actress. In 1979 she met Chichin, who was active in the French rock scene as a guitarist in a few different bands, and together the two founded les Rita Mitsouko. With Chichin on guitar and herself on vocals, the duo made its live debut in 1980, and made its recording debut in 1982 with the single "Minuit Dansant." They made their full-length album debut in 1984 with Rita Mitsouko. The album spawned the smash hit "Marcia Baila," which reached number two on the French singles chart in 1985 and inspired a classic video, inspired in turn by Ringer's former dance teacher, Argentine choreographer Marcia Moretto. Les Rita Mitsouko's next two albums, The No Comprendo (1986) and Marc & Robert (1988), were helmed by David Bowie producer Tony Visconti. The former album was especially successful, spawning the classics "Andy" and "C'est Comme Ça," and winning a Victoires de la Musique award for Best Album of the Year. In 1988, Ringer teamed up with Marc Lavoine for a hit duet, "Qu'est-ce Que T'es Belle." During the '90s she collaborated with Coba on a couple of songs and was featured on numerous soundtracks and compilations, yet she remained affixed to Les Rita Mitsouko over the years, despite her popularity and the duo's inactivity throughout most of the '90s. Only after Chichin suddenly died of cancer in 2007 did she made her solo album debut. Released on the one-year anniversary of Chichin's death, Chante les Rita Mitsouko and More à la Cigale (2008) is a live CD/DVD that includes numerous Rita Mitsouko classics. ~ Jason Birchmeier, Rovi