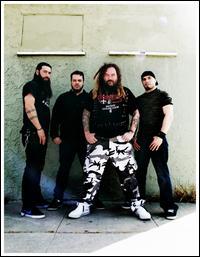 Brazilian death/thrash metal act Cavalera Conspiracy originally formed in 2006 as Inflikted, around the talents of ground breaking metal juggernaut Sepultura siblings Max Cavalera (vocals and guitar) and drummer Igor Cavalera, guitarist Marc Rizzo (Soulfly), and bassist Joe Duplantier (Gojira), but changed the name to Cavalera Conspiracy for legal reasons. The band's debut for Roadrunner Records, Inflikted, arrived on March 25, 2008. The band took a brief break as the Cavalera brothers returned to their respective bands, but regrouped in 2009 for a European tour. The following year, the band went back into the studio to begin work on their follow-up album. The brothers released their second blast of groove metal heaviness, appropriately titled Blunt Force Trauma, in 2011. ~ James Christopher Monger, Rovi