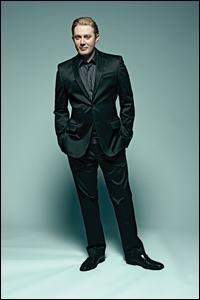 As the second-place contestant on Fox television's second season of American Idol, vocalist Clay Aiken wowed television audiences with his Southern charm, sweet demeanor, and powerful tenor voice, all of which combined to make him a pop star (and, later, a fixture on Broadway). Originally, Aiken had planned to try out for the reality TV series The American Race, but went ahead and auditioned for the Idol competition to please an encouraging friend. Out of 7,000 hopefuls, the Charlotte, North Carolina native won the hearts of the judges as well as millions of fans across the globe.

Born on November 30, 1978, Aiken began singing at an early age, and was confident enough to perform the Dolly Parton/Kenny Rogers classic "Islands in the Stream" at a local high-school dance by age five. Two year later, he was buying albums through a mail-order catalog, eager to get his hands on any kind of music. Aiken's blossoming talent continued into his teenage years, when he became a regular member of the Raleigh Boys Choir and enjoyed roles in The Music Man, Oklahoma!, various stage plays, and regional playhouse shows.

When it came time to go to college, music wasn't Aiken's strongest calling. He studied special education instead, and set his sights on attending Virginia's College of William & Mary for a master's degree in administration. Before he could further his education, however, Aiken auditioned for American Idol and ended up wooing a weekly audience of 21 million television viewers in early 2003. His rendition of Simon & Garfunkel's "Bridge Over Troubled Waters" sewed him a spot among Americans' hearts, and although he finished second to Ruben Studdard, Aiken's loss was not taken lightly. He landed a deal with RCA through Simon Fuller's 19 Recordings Limited within weeks of the show's finale.

That same month, Aiken's debut single, "This Is the Night," made history by shooting to number one on Billboard's Hot 100 chart. It sold more than 392,000 copies during its first week, besting Elton John's previous record for "Candle in the Wind 1997." In October 2003, Aiken returned to the spotlight and issued his full-length studio debut, The Measure of a Man. Once again, the little guy with the big voice made a big splash, and The Measure of a Man sold 613,000 copies while climbing to number one on Billboard's Top 200 during its first week of release. Aiken's first holiday effort, Merry Christmas with Love, followed in November 2004. The album debuted at number one on Billboard's Top Holiday Albums chart, giving Merry Christmas with Love the biggest debut week sales figures for a Christmas album in SoundScan history. Aiken released A Thousand Different Ways in September 2006 and made his Broadway debut in early 2008, playing the role of Sir Robin in Spamalot. On My Way Here arrived that same year, featuring a track penned by OneRepublic's Ryan Tedder. Aiken released Tried & True, a collection of standards from the '50s and '60s, in 2010 on the Decca label. In 2012, on the heels of his appearance on NBC's Celebrity Apprentice, Aiken released the album Steadfast, featuring tracks off Tried & True as well as a few more of his favorite songs to sing in concert. Also included was his original single "Bring Back My Love." ~ MacKenzie Wilson & Andrew Leahey, Rovi