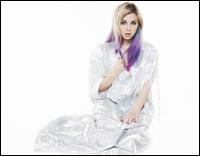 Bringing the Ke$ha style of dance-pop to more of a street level, pop-rapper and singer Colette Carr was born and raised in Malibu, California. In 2008, she was discovered at a Game concert -- in the most hardcore of hardcore rap surroundings -- as a call-out for freestylers in the audience, which drew Carr on-stage. She wowed the crowd and was pulled backstage where producers, including the successful crew the Cataracs, offered the young singer their card. In 2009 she released her debut single "Back It Up," a viral hit that caught the attention of Nick Canon, who signed Carr to his record label N'Credible. The single "Bitch Like Me' followed in 2010 along with the mixtape Sex Sells Stay Tuned. She released her debut album, Skitzo, in 2013 with production coming from the Cataracs, RedOne, and FrankMusik, while guest artists included rapper E-40 and industrial pop singer Porcelain Black. ~ David Jeffries, Rovi