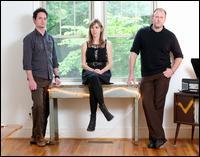 Crooked Fingers was the solo project of singer/guitarist Eric Bachmann, best known as the longtime frontman for North Carolina indie rock institution Archers of Loaf. A onetime saxophone major at Appalachian State University, he co-founded the Archers in Chapel Hill in late 1991; quickly emerging as a major local favorite, the band's off-kilter noise pop broke through on national college radio two years later with the release of the single "Web in Front," followed by a series of acclaimed LPs including 1994's Icky Mettle and 1996's All the Nation's Airports. In 1995, Bachmann also teamed with producer Caleb Southern to form the instrumental project Barry Black, debuting with a self-titled LP on Alias; Tragic Animal Stories followed two years later.

In the wake of Archers of Loaf's 1998 dissolution, Bachmann founded Crooked Fingers, debuting in early 2000 with a self-titled album issued on the WARM label. A collection of original songs, Bring on the Snakes, followed in 2001, but only one year later a cover EP featuring songs by Neil Diamond and Queen came out on Merge Records. Entitled Reservoir Songs, this was his debut for the label. The next year, Red Devil Dawn furthered his vision, allowing elements like horns and strings to creep into his melancholy indie pop. In 2005 Bachmann penned Dignity and Shame, a loosely tied conceptual piece based on the life of legendary bullfighter Manolete and his lover, Spanish actress Lope Sino. In 2006, going by his surname, Bachmann joined Saddle Creek and released To the Races, a minimal acoustic-based record.

After reverting back to the pseudonym Crooked Fingers in 2008, Forfeit/Fortune was released for Red Pig/Constant Artists, Inc. and distributed exclusively at 20 North American independent record stores, handpicked by Bachmann himself. Bachmann spent some of 2011 playing reunion shows with Archers of Loaf, but found the time to work on new material for Crooked Fingers, releasing Breaks in the Armor through Merge Records later that year. ~ Jason Ankeny, Rovi