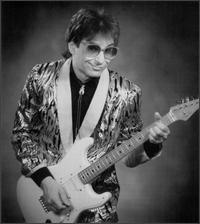 Member of: Brownsville Station, The Del-Tino's, Cub Koda & the Points

Best known as the leader of Brownsville Station and composer of their hit, "Smokin' in the Boys Room," Cub Koda proved that his roots went far deeper, both before the band's formation, during its days in the sun, and long after its demise. His high-school band, the Del-Tinos, was dipping into blues and rockabilly as far back as 1963 -- not only pre-Butterfield, but pre-Beatles. Similarly, he recorded legendary home tapes during his off-hours from Brownsville, before the rockabilly revival had uttered its first hiccup, and later teamed with Hound Dog Taylor's former rhythm section, the Houserockers, to play the blues in the '80s. Along the way he cranked out a monthly column ("The Vinyl Junkie") and recorded a series of albums that kept roots music of all kinds alive without ever treating it like a museum piece.

Originally a drummer at age five, Koda switched over to guitar when he formed his first band, the Del-Tinos, a teenage garage combo equally influenced by rock & roll, blues, and rockabilly. The group cut its first single -- Roy Orbison's "Go Go Go" -- in the fall of 1963, and released two more 45s independently before it disbanded in 1966. By this time, Koda had become so immersed in the blues that the last Del-Tinos single had the trio doing Muddy Waters' "I Got My Mojo Workin'" on one side and Robert Johnson's "Ramblin' on My Mind" on the other.

After a couple of bands in the late '60s that largely went unrecorded, Koda formed Brownsville Station in early 1969. After playing local Midwest gigs and releasing a handful of singles, the band released its first album in 1970. But it wasn't until "Smokin' in the Boys Room" that Brownsville had a genuine hit. Released as a single in the fall of 1973, "Smokin'" climbed all the way to number three, eventually selling over two million copies.

But Koda began to back away from the group's loud, overdriven rock sound -- at least in private. He purchased a multi-track tape recorder and started producing one-man-band tapes, where he overdubbed all the instruments and vocals. For the next several years, Koda made home recordings of rockabilly, blues, R&B, country, jazz, and early rock & roll -- the exact opposite of Brownsville's heavy rock stance; the rockabilly tapes were eventually released as That's What I Like About the South in the early '80s, with other tracks showing up on compilations as late as 1993.

When Brownsville disbanded in 1979, Cub began writing a column called "The Vinyl Junkie" for Goldmine magazine, later published in DISCoveries. Through the column's success, Koda established himself as an expert record collector and critic -- eventually, Cub would compile and write liner notes for a number of projects, including three volumes in Rhino's acclaimed Blues Masters series.

In 1980, Koda worked with Hound Dog Taylor's backing band, the Houserockers. Over the next 15 years, Koda, guitarist Brewer Phillips, and drummer Ted Harvey performed and recorded together, with their first album, It's the Blues, appearing in 1981 and the latest, The Joint Was Rockin', being released in 1996.

Throughout the '80s and '90s, Koda has continued to divide his time equally between touring, recording, and writing. 1993 saw the twin release of Smokin' in the Boy's Room: The Best of Brownsville Station on Rhino and Welcome to My Job, a retrospective of his non-Brownsville material on Blue Wave, followed a year later by Abba Dabba Dabba: A Bananza of Hits on Schoolkids Records.

During the second half of the '90s, Koda increased his presence as a writer, in addition to staying musically active. In addition to editing The All Music Guide to Blues, he wrote and edited Blues for Dummies. He also continued writing liner notes, contributing work to retrospectives of the Trashmen, Jimmy Reed, JB Hutto, the Kingsmen, and the Miller Sisters, among others. He also supervised the 1996 release of The Joint Was Rockin', a live album of Cub with the Houserockers in the early '80s, plus a 1998 Norton reissue of recordings he made with the Del-Tinos.

Cub wasn't just an archivist during this time. In 1997, he released Box Lunch on J-Bird Records, his first collection of new material since Abba Dabba Dabba. Box Lunch was a solo, all-acoustic album unlike anything he had recorded in the past. Koda returned to hard-driving, loud rock & roll with 2000's Noise Monkeys, an album he recorded live with a reunited Points in 1999. Released in the spring, Noise Monkeys was receiving strong reviews, including a positive notice by Robert Christgau in The Village Voice, when tragedy struck. Koda had been sick for a while, but he was slowly recovering. In the spring, he was put on kidney dialysis, and he was recovering, but then he suddenly took sick during the evening of June 30, 2000. He died early in the morning on July 1, 2000 at the age of 51. Considering that he was sick, perhaps it shouldn't have been a surprise that he succumbed to his illness, but Cub kept working and rocking until the end -- he was writing and recording music in the last week of his life. He never lost his love for music and he always shared that love anyway he could, whether it was as a musician, journalist, DJ, or friend. As he said, he was "somewhere between a cult figure and rock & roll legend," and to anyone that knew him, that was the gospel truth. ~ Stephen Thomas Erlewine, Rovi