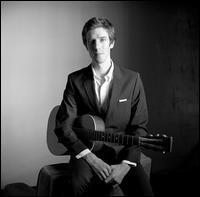 Kentucky-based singer/songwriter Daniel Martin Moore had the rare fortune of securing a record deal through an unsolicited demo. On a whim, the Cold Spring native sent his home recordings to Sub Pop Records in January 2007, resulting in a full-length debut for the label just one year later. Moore's amiable and engaging folk songs were lent weight in the studio by co-producer Joe Chiccarelli (Shins, White Stripes), violin player Petra Haden, upright bass player Justin Meldal-Johnsen, and vocalist Jesca Hoop, all of whom appeared on 2008's Stray Age. He kept the collaborative spirit alive one year later by working with cellist Ben Sollee, who had previously played alongside Abigail Washburn in the folk supergroup Sparrow Quartet. Together, the two composed a number of songs inspired by the American South, and fellow Kentucky native Jim James soon joined the project as producer. The resulting album, Dear Companion, was released in 2010 under both musicians' names, followed in early 2011 by Moore's second solo effort, the gospel-influenced In the Cool of the Day. ~ James Christopher Monger & Andrew Leahey, Rovi