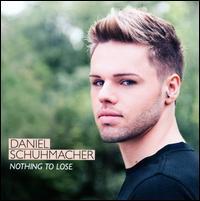 Daniel Schuhmacher is a chart-topping pop singer from Germany who rose to fame in 2009 on the television show Deutschland Sucht den Superstar. Born on April 19, 1987, in Pfullendorf, Baden-Württemberg, he was the first-place winner of the sixth season of Deutschland Sucht den Superstar, a German-language adaptation of Pop Idol. On the night of May 9, 2009, during the season finale, he performed the songs "Soulmate" by Natasha Bedingfield, "Ain't No Sunshine" by Bill Withers, and "Anything But Love" by German hitmaker Dieter Bohlen in competition against second-place runner-up Sarah Kreuz. In the immediate aftermath of his first-place finish, Schuhmacher was offered a major-label recording contract with Sony Music and proceeded to record his full-length solo album debut, The Album. "Anything But Love" was released almost immediately as the lead single and was a smash hit, topping the singles charts in Germany, Austria, and Switzerland. Released a month later, The Album was also a massive commercial success, topping the albums charts in Germany and Austria and reaching the Top Five in Switzerland. While it includes a couple cover songs (Eurythmics' "Sweet Dreams" and Bill Withers' "Ain't No Sunshine," both of which Schuhmacher had performed on Deutschland Sucht den Superstar), The Album is otherwise comprised exclusively of English-language material penned by Bohlen. ~ Jason Birchmeier, Rovi