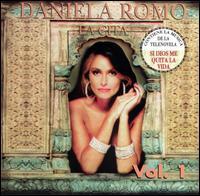 Mexican singer Daniela Romo started singing in a vocal group called los Hermanos Zavala and participated in Eduardo Gorostiza's musical Contigo Pan y Cebolla. To improve her skills, Romo studied acting at Andrés Solar's Academy, becoming a model in 1973 and getting roles in TV commercials soon after. Daniela Romo started her solo career in 1983, releasing her first self-titled album with the hit song "Mentiras." That album was followed by Amor Prohibido, which came out with her second hit "Yo No Te Pido La Luna." In 1992, New York's Ace awarded her for Best Album of the Year, Best Female Performer, and Best Video Clip. In January of 1993, Romo was named Mr. Amigo by the Mexican community in Brownsville, Texas. That same year the artist was voted Best Female Singer in Argentina. By the end of 2000, Univisión signed her up to host the Spanish version of Who Wants to Be a Millionaire. ~ Drago Bonacich, Rovi