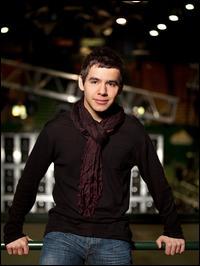 David Archuleta became one of the most recognizable figures on television in 2008, when his tenor vocals and boyish charm helped earn him a second-place finish on American Idol. Although born in Miami, Florida, he'd spent most of his childhood in Utah, where he lived with his parents (Jeff, a jazz trumpeter, and Lupe Marie, a Honduran salsa singer) and four siblings. Inspired by a videotaped performance of Les Misérables, Archuleta began singing at age six, and his talent helped him secure performances at the Utah Talent Competition, The Jenny Jones Show, and Star Search, where he was crowned Junior Vocal Champion in 2003.

Archuleta auditioned for American Idol''s seventh season in 2007, earning his first praise from the judging panel with a rendition of John Mayer's "Waiting on the World to Change." He advanced to the semi-finals and remained with the show throughout its entire season, delivering strong, passionate performances of pop ballads like "Another Day in Paradise" and John Lennon's "Imagine." At 17 years old, Archuleta was the season's youngest contestant, and he ultimately finished as the runner-up to David Cook. "Crush," the first single from his self-titled debut album, debuted at number two later that summer, while the full-length album David Archuleta followed in November.

Archuleta's album went gold within several months, and the singer spent the first half of 2009 touring with McFly in the U.K. and Demi Lovato in America. He also found time to work on a holiday album, Christmas from the Heart, which was released later that year. When it came time to record a proper follow-up to his 2008 debut, Archuleta widened his sound by calling upon producers like S*A*M & Sluggo, who helped helm the peppy lead single "Something 'Bout Love." The accompanying album, The Other Side of Down, was released several months later in October 2010. In 2012, Archuleta began a two-year religious mission in Chile, and music he recorded before his sabbatical began to appear. First, there was the Philippines-only release Forevermore and his covers album BEGIN., the latter of which included the newly recorded track "Broken," co-written by Archuleta. In spring of 2013, Forevermore was repurposed for the American release No Matter How Far. ~ Andrew Leahey, Rovi