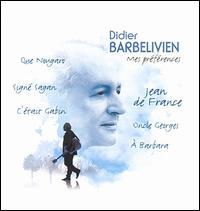 Didier Barbelivien is a French pop singer/songwriter who wrote songs for a range of superstars in the 1970s before garnering success of his own as a solo performer in subsequent decades. Born March 10, 1954, in Paris, France, he began his professional career as a songwriter in the early '70s. Among the earliest performances of his songs on commercial recordings are Gérard Stern's "Je T'aime Nue" (1971) and François Valéry's "Le Prince d'Amour" (1974). Beginning in 1975 his songs were repeatedly performed by Christophe, Gérard Lenorman, Marie Laforêt, and Michèle Torr, among other French pop superstars. Meanwhile, he released a series of early singles on Polydor, namely "Alcools" (1976), "I'm Singing" (1977), and "La Petite Fille de Bretagne" (1978). In 1980 Barbelivien made his full-length album debut with Elle on the label Picabou. In addition to numerous singles, he subsequently released his second and third albums, Elsa (1982) and Là où Je T'aime (1984), on Charles Talar Records. As he was steadily establishing himself as a solo performer during the 1980s, Barbelivien's songs were continually performed by French pop superstars such as Michel Sardou, Demis Roussos, Patricia Kaas, and Celine Dion. Barbelivien ultimately broke through to mainstream breakthrough in 1990 in tandem with Félix Gray, with whom he teamed up for a pair of chart-topping smash hits, "À Toutes les Filles..." and "Il Faut Laisser le Temps au Temps." The duo's success continued with the Top Five hit "E Vado Via" and the Top 20 hit "Nos Amours Cassées" in 1991, while "Les Mariés de Vendée," a collaboration between Barbelivien and Anaïs, hit number two on the French singles chart. In the wake of these mainstream breakthrough hits, a range of greatest-hits collection were released throughout the 1990s, showcasing Barbelivien's remarkably productive career in a retrospective light. Most notable among these greatest-hits collections is a three-volume series released in 1996 comprised of Elle, Vol. 1, Il Faut Laisser le Temps au Temps, Vol. 2, and Peut-être Toi, Peut-être une Autre, Vol. 3. Barbelivien continued to release new material, too, including popular latter-day albums such as Yesterday les Beatles (1997), Chanteur Français (2001), Envoie les Clowns (2005), and Etat des Lieux (2007). In 2009, the same year he was made Chevalier (Knight) of the Légion d'honneur, Barbelivien reached the top ten of the French album charts with Atelier d'Artistes, while 2011's Mes Préférences peaked at number four. There was a break of four years before 2013's return of Didier Barbelivien with the album Dédicacé. ~ Jason Birchmeier, Rovi