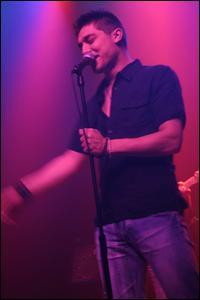 Singer/songwriter Diego Martin was born in 1980 in Murcia, a part of Spain known for its thriving musical community. Though Martin did not come from a musically inclined family, he found himself completely in love with music by his mid-teens. At the age of 15, Martin saw a classmate at school playing the guitar, and was instantly hooked on the idea of being a songwriter and performer. He did not begin teaching himself guitar and singing at home until the age of 18. Spending the next few years working in a gas station and writing material, Martin would amass a large catalog of songs. His lyrics centering on love and loss, Martin would soon catch the ear of execs at DRO Atlantic with his melancholy, lamenting style. His first release, entitled Vivir No Es Solo Respirar (To Live Is Not Just to Breathe) made huge waves on Spanish charts in 2006. Comprised entirely of Martin's original material, the record featured a collaboration with popular recording artist Raquel Rosario, singer for El Sueño de Morfeo. His sophomore effort, Puntos Suspensivos, was released in 2007, and over the next six years he went on to release two more albums, 2010's Melicia and 2013's Siendo. The records spawned several chart hits and saw him praised by critics for his increasing musical maturity, even as he went in a harder, more rock-oriented direction. ~ Evan C. Gutierrez, Rovi