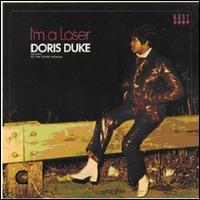 Deep soul diva Doris Duke was born Doris Curry in Sandersville, GA, in 1945. After stints in a series of gospel units, including the Raspberry Singers, the David Sisters, and the Caravans, by 1963 she was settled in New York City, working as a session vocalist in addition to backup duties at the legendary Apollo Theater. Under her married name of Doris Willingham, she cut her debut solo single, "Running Away from Loneliness," for the tiny Hy-Monty label in 1966; "You Can't Do That" followed two years later on Jay Boy. Despite solid reviews, neither record made a commercial splash, and she returned to her session career, often commuting to Philadelphia to record with the production team of Kenny Gamble and Leon Huff. When former Atlantic Records producer Jerry "Swamp Dogg" Williams Jr. struck out on his own, he signed the singer and renamed her Doris Duke, recording the 1969 LP I'm a Loser at Capricorn, Phil Walden's studio in Macon, GA.

Though considered the finest deep soul record of all time by no less than soul expert Dave Godin, I'm a Loser was rejected by dozens of labels before it finally surfaced on Wally Roker's Canyon label. Although the first single, "To the Other Woman," cracked Billboard's R&B Top Ten, Canyon soon spiraled into financial disaster, destroying the album's commercial momentum. Duke spent the next several years in creative limbo, finally reuniting with Swamp Dogg for 1975's Mankind label release A Legend in Her Own Time -- their partnership ended acrimoniously prior to its release, however, and the record received scant attention. Duke next resurfaced on the British label Contempo with Woman, a much-acclaimed set released stateside on the Scepter imprint. After 1981's Manhattan set Funky Fox, she retired from music, and at the time of this writing her whereabouts and activities are unknown. ~ Jason Ankeny, Rovi