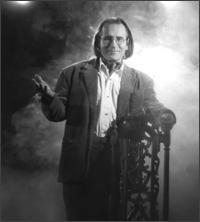 Dr. Ammondt (born Jukka Ammondt) was already a senior citizen when he began singing as a way to cope with a painful divorce. In a little more than a decade, the Finland-born vocalist, songwriter, ethnomusicologist, and University of Jyvaskyla lecturer on literature has made up for lost time.

Defying simple categorization, Ammondt has taken completely different approaches to each of his recordings. Debuting with a tango single in 1992, he released a full-length tango album, Surun Sirvet/The Wings of Sorrow, featuring tunes by Finnish songwriter, Toivo Karki, the following year. A Latin album, Tango Triste Finnicum/Sad Finnish Tango, with songs that Ammondt had translated with Dr. Teivas Oksala, received the Pope's Medal in 1994.

Taking a six-year hiatus from recording, Ammondt re-emerged with his most ambitious album, Three Songs in Sumerian, in July 2001. Singing in a language that had been spoken in ancient Mesopotamia, but had become extinct around 1800 B.C., Ammondt shows his wit with the oddest version of "Blue Suede Shoes" you're liable to hear. He has collaborated with Reine Rimon & Her Hot Papas on New Orleans jazz-style adaptations of "Sumerian Hymn to Inanna," and an Assyrian elegy. ~ Craig Harris, Rovi