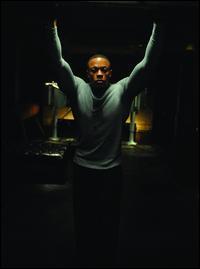 More than any other rapper, Dr. Dre was responsible for moving away from the avant-noise and political stance of Public Enemy and Boogie Down Productions as well as the party vibes of old-school rap. Instead, Dre pioneered gangsta rap and his own variation of the sound, G-funk. BDP's early albums were hardcore but cautionary tales of the criminal mind, but Dre's records with N.W.A. celebrated the hedonistic, amoralistic side of gang life. Dre was never much of a rapper -- his rhymes were simple and his delivery was slow and clumsy -- but as a producer, he was extraordinary. With N.W.A. he melded the noise collages of the Bomb Squad with funky rhythms. On his own, he reworked George Clinton's elastic funk into the self-styled G-funk, a slow-rolling variation that relied more on sound than content. When he left N.W.A. in 1992, he founded Death Row Records with Suge Knight, and the label quickly became the dominant force in mid-'90s hip-hop thanks to his debut, The Chronic. Soon, most rap records imitated its sound, and his productions for Snoop Doggy Dogg and Blackstreet were massive hits. For nearly four years, G-funk dominated hip-hop, and Dre had enough sense to abandon it and Death Row just before the whole empire collapsed in late 1996. Dre retaliated by forming a new company, Aftermath, and while it was initially slow getting started, his bold moves forward earned critical respect.

Dre (born Andre Young, February 18, 1965) became involved in hip-hop during the early '80s, performing at house parties and clubs with the World Class Wreckin' Cru around South Central Los Angeles and making a handful of recordings along the way. In 1986, he met Ice Cube, and the two rappers began writing songs for Ruthless Records, a label started by former drug pusher Eazy-E. Eazy tried to give one of the duo's songs, "Boyz-n-the Hood," to HBO, a group signed to Ruthless. When the group refused, Eazy formed N.W.A. -- an acronym for Niggaz With Attitude -- with Dre and Cube, releasing their first album in 1987. A year later, N.W.A. delivered Straight Outta Compton, a vicious hardcore record that became an underground hit with virtually no support from radio, the press, or MTV. N.W.A. became notorious for their hardcore lyrics, especially those of "Fuck tha Police," which resulted in the FBI sending a warning letter to Ruthless and its parent company, Priority, suggesting that the group should watch their step.

Most of the group's political threat left with Cube when he departed in late 1989 amid many financial disagreements. While Eazy appeared to be the undisputed leader following Cube's departure -- and he was certainly responsible for the group approaching near-parodic levels with their final pair of records -- the music was in Dre's hands. On both the 1990 EP 100 Miles and Runnin' and the 1991 album Efil4zaggin ("Niggaz4life" spelled backward), he created dense, funky sonic landscapes that were as responsible for keeping N.W.A. at the top of the charts as Eazy's comic-book lyrics. While the group was at the peak of their popularity in 1991, Dre began to make efforts to leave the crew, especially after he was charged with assaulting the host of a televised rap show in 1991. The following year, Dre left the group to form Death Row Records with Suge Knight. According to legend, Knight held N.W.A.'s manager at gunpoint and threatened to kill him if he refused to let Dre out of his contract.

Dre released his first solo single, "Deep Cover," in the spring of 1992. Not only was the record the debut of his elastic G-funk sound, it also was the beginning of his collaboration with rapper Snoop Doggy Dogg. Dre discovered Snoop through his stepbrother Warren G, and he immediately began working with the rapper -- Snoop was on Dre's 1992 debut, The Chronic, as much as Dre himself. Thanks to the singles "Nuthin' but a 'G' Thang," "Dre Day," and "Let Me Ride," The Chronic was a multi-platinum, Top Ten smash, and the entire world of hip-hop changed with it. For the next four years, it was virtually impossible to hear mainstream hip-hop that wasn't effected in some way by Dre and his patented G-funk. Not only did he produce Snoop's 1993 debut, Doggystyle, but he orchestrated several soundtracks, including Above the Rim and Murder Was the Case (both 1994), which functioned as samplers for his new artists and production techniques, and he helmed hit records such as Blackstreet's "No Diggity," among others, including a hit reunion with Ice Cube, "Natural Born Killaz." During this entire time, Dre released no new records, but he didn't need to -- all of Death Row was under his control, and most of his peers mimicked his techniques.

The Death Row dynasty held strong until the spring of 1996, when Dre grew frustrated with Knight's strong-arm techniques. At the time, Death Row was devoting itself to 2Pac's label debut, All Eyez on Me (which featured Dre on the breakthrough hit, "California Love"), and Snoop was busy recovering from his draining murder trial. Dre left the label in the summer of 1996 to form Aftermath, declaring gangsta rap dead. While he was subjected to endless taunts from his former Death Row colleagues, their sales slipped by 1997 and Knight was imprisoned on racketeering charges by the end of the year. Dre's first album for Aftermath, the various-artists collection Dr. Dre Presents...The Aftermath received considerable media attention, but the record didn't become a hit, despite the presence of his hit single, "Been There Done That." Even though the album wasn't a success, the implosion of Death Row in 1997 proved that Dre's inclinations were correct at the time. Both 2001 and its companion instrumental version followed in 1999. ~ Stephen Thomas Erlewine, Rovi