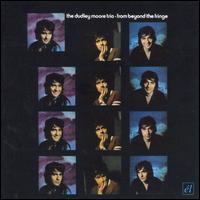 Member of: Beyond the Fringe

Though he was renowned as a groundbreaking British comedian and achieved Hollywood stardom thanks to his roles in 10 and Arthur, Dudley Moore took the most pride in his accomplishments as a musician and composer. A choirboy at age six and the organist at church weddings by 14, as a child Moore found refuge in music from the hospital stays and taunting from other children he endured because of his club foot. Eventually, he won a scholarship to Magdalen College at Oxford to study the organ, but he left the school to play jazz piano with Johnny Dankford and tour the U.S. with Vic Lewis. When he returned to Oxford, he met comedian Peter Cook and joined the satirical sketch comedy revue Beyond the Fringe, where his over-the-top piano solos earned him his first widespread success. Moore's witty, whimsical musical and comedic stylings complemented Cook's more acerbic sense of humor perfectly, and throughout the '60s and '70s the pair continued to mix humor and music in projects like the BBC show Not Only But Also and their foul-mouthed alter-egos Derek and Clive. Moore and Cook also made several films together, and Moore composed the music for movies including 30 Is a Dangerous Age, Cynthia and the classic Bedazzled. During the '70s and '80s, Moore found the time to release several albums' worth of piano-based jazz, including Dudley Moore at the Waredon Festival and Come Again, in between his film, television, and stage work. Both his comedy and music careers waned in the '90s due to health problems, which included several minor heart attacks and open heart surgery. Most damagingly to Moore as a musician, in 1999 he was diagnosed with progressive supranuclear palsy (PSP), a rare, incurable brain disorder that includes imbalance, stiffness, blurred vision, difficulty speaking, and slowed movements among its symptoms. Moore devoted his time to raising awareness of the disease as well as funds to research it, forming the Dudley Moore Research Fund for Progressive Supranuclear Palsy; he released Live From an Aircraft Hangar, a collection of his previously recorded concerts, and held a gala concert at Carnegie Hall on his 66th birthday to raise funds for PSP research. ~ Heather Phares, Rovi