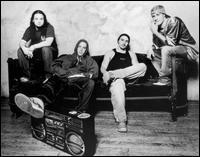 Formed in 1995 in Elizabeth, NJ, E-Town Concrete released their debut album, Time 2 Shine, on Back to Basics in 1997. In 2000, the metal heavy hitters Triple Crown Records released their follow-up The Second Coming. Fusing metal, hip-hop, and hardcore, the foursome developed a cult of fans on the East Coast, selling 4,000 copies of their album in one record store alone, Vintage Vinyl in Fords, NJ, largely due to their New Jersey based shows and constant touring. ~ Stacia Proefrock, Rovi