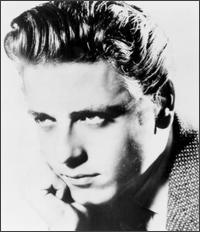 Somehow, time has not accorded Eddie Cochran quite the same respect as other early rockabilly pioneers like Buddy Holly, or even Ricky Nelson or Gene Vincent. This is partially attributable to his very brief lifespan as a star: he only had a couple of big hits before dying in a car crash during a British tour in 1960. He was in the same league as the best rockabilly stars, though, with a brash, fat guitar sound that helped lay the groundwork for the power chord. He was also a good songwriter and singer, celebrating the joys of teenage life -- the parties, the music, the adolescent rebellion -- with an economic wit that bore some similarities to Chuck Berry. Cochran was more lighthearted and less ironic than Berry, though, and if his work was less consistent and not as penetrating, it was almost always exuberant.

Cochran's mid-'50s beginnings in the record industry are a bit confusing. His family had moved to Southern California around 1950, and in 1955 he made his first recordings as half of the Cochran Brothers. Here's the confusing part: although the other half of the act was really named Hank Cochran, he was not Eddie's brother. (Hank Cochran would become a noted country songwriter in the 1960s.) Eddie was already an accomplished rockabilly guitarist and singer on these early sides, and he started picking up some session work as well, also finding time to make demos and write songs with Jerry Capehart, who became his manager.

Cochran's big break came about in a novel fashion. In mid-1956, while Cochran and Capehart were recording some music for low-budget films, Boris Petroff asked Eddie if he'd be interested in appearing in a movie that a friend was directing. The film was The Girl Can't Help It, and the song he would sing in it was "Twenty-Flight Rock." This is the same song that Paul McCartney would use to impress John Lennon upon their first meeting in 1957 (Paul could not only play it, but knew all of the lyrics).

Cochran had his first Top 20 hit in early 1957, "Sittin' in the Balcony," with an echo-chambered vocal reminiscent of Elvis. That single was written by John D. Loudermilk, but Eddie would write much of his material, including his only Top Ten hit, "Summertime Blues." A definitive teenage anthem with hints of the overt protest that would seep into rock music in the 1960s, it was also a technical tour de force for the time: Cochran overdubbed himself on guitar to create an especially thick sound. One of the classic early rock singles, "Summertime Blues" was revived a decade later by proto-metal group Blue Cheer, and was a concert staple for the Who, who had a small American hit with a cover version. (Let's not mention Alan Jackson's country rendition in the 1990s.)

That, disappointingly, was the extent of Cochran's major commercial success in the U.S. "C'mon Everybody," a chugging rocker that was almost as good as "Summertime Blues," made the Top 40 in 1959, and also gave Eddie his first British Top Tenner. As is the case with his buddy Gene Vincent, though, you can't judge his importance by mere chart statistics. Cochran was very active in the studio, and while his output wasn't nearly as consistent as Buddy Holly's (another good friend of Eddie's), he laid down a few classic or near-classic cuts that are just as worthy as his hits. "Somethin' Else," "My Way" (which the Who played in concert at the peak of psychedelia), "Weekend" (covered by the Move), and "Nervous Breakdown" are some of the best of these, and belong in the collection of every rockabilly fan. He was also (like Holly) an innovator in the studio, using overdubbing at a time when that practice was barely known on rock recordings.

Cochran is more revered today in Britain than the United States, due in part to the tragic circumstances of his death. In the spring of 1960, he toured the U.K. with Vincent, to a wild reception, in a country that had rarely had the opportunity to see American rock & roll stars in the flesh. En route to London to fly back to the States for a break, the car Cochran was riding in, with his girlfriend (and songwriter) Sharon Sheeley and Gene Vincent, had a severe accident. Vincent and Sheeley survived, but Cochran died less than a day later, at the age of 21. ~ Richie Unterberger, Rovi