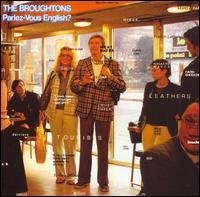 Formed in Warwick, England, the Edgar Broughton Band arrived on the London underground music scene in 1968. Led by the Broughton brothers, vocalist/guitarist Edgar and drummer Steve, and fleshed out by bassist Arthur Grant and guitarist Victor Unitt (who also briefly served with the Pretty Things), they soon signed with the Harvest label and issued their debut, Wasa Wasa, a collection of underground electric blues jams anchored by Edgar's Captain Beefheart-like vocals, in late 1969. The Edgar Broughton Band returned in 1970 with Sing Brother Sing, which reached the U.K. Top 20 and spawned a pair of minor hit singles, "Out Demons Out" and "Apache Drop-Out" (a fusion of Beefheart's "Dropout Boogie" and the Shadows' "Apache"). The group seemed poised for a major commercial breakthrough, but even as their brand of heavy rock was flourishing thanks to groups like Black Sabbath and Deep Purple, the Broughton Band made an about-face, and their music became considerably more quiet and politically charged. Their chart momentum stalled, and a 1971 self-titled effort failed to catch on.

After both 1972's Inside Out and 1973's Oora met a similar fate, the group left Harvest for NEMS. Legal wrangles locked them out of the studio for a number of months, but they finally resurfaced in 1975 -- minus Unitt, who'd been replaced by guitarist John Thomas -- with Bandages. A brief breakup followed, but in 1978 they returned with Live Hits Harder. By the release of 1979's Parlez Vous English?, the group had expanded to a six-piece, using the name the Broughtons. Returning to the Edgar Broughton Band moniker, the band became a three-piece for 1982's Super Chip: The Final Silicon Solution, a concept album filled with synthesizers and new wave tempos. Touring continued throughout '80s, '90s, and 2000s. In 2004 the band's six albums for the Harvest label were reissued, each featuring numerous bonus tracks. ~ Jason Ankeny, Rovi