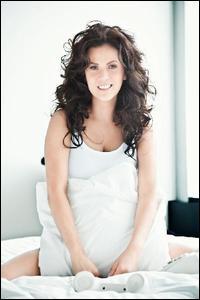 Edith Márquez's musical accomplishments are broad and impressive, but it is indisputably her membership in the flagship pop group Timbiriche that ushered her into Mexican stardom. Born on January 27, 1973, in Mexico City, Márquez exhibited talent early on as a performer and singer. She participated in televised singing competitions as a child, including Canta, Canta and Juguemos a Cantar. Her success on the screen lead to roles in popular programs and telenovelas like Papá Soltero, Agujetas de Color de Rosa, and Sentimientos Ajenos. Márquez was invited to join the then-fledgling teen pop group Timbiriche, which quickly experienced amazing market success. Songs like "Pasos," "Máscaras," and "Yo No Soy una Más" took Timbiriche to the heights of the Latin pop world. Having enjoyed years of success, Márquez left Timbiriche to focus on personal matters, including her relationship with musician Alberto Sánchez and the birth of their child Sebastián. In 1998 Márquez initiated her career as a solo artist with the release of her debut record, entitled Frente a Ti, on Warner Music México. On the strength of singles like "Por Hablarle de Tí" and "Mírame," the album sold better than 250,000 units in Mexico alone. Subsequent releases experienced similar success. Márquez put out a record every two years or so, including titles such as Caricias del Cielo (2000), Extraviate (2001), Quien Te Cantará (2004), and Cuando Grita la Piel (2005). Following her fifth release with Warner, Márquez signed a deal with EMI, releasing her debut record with the label, entitled Memorias del Corazón, in 2007. The record was Márquez's most successful in years, reaching number five on Mexican pop music charts. ~ Evan C. Gutierrez, Rovi