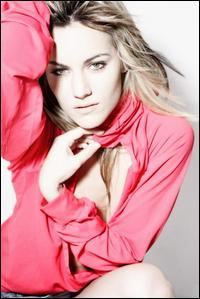 Edurne Garcia Almargo was born in Madrid on December 22, 1985. Edurne (meaning "snow" in the Euskera language spoken by the Basque people of northern Spain) was attracted to music from a young age, getting her start singing in karaoke bars with friends. She soon joined up with a group of young singers to form the band Los Trastos, who went on to make three recordings, even performing on TVE's Musica Si. Subsequent television appearances included programs Ana y Los Siete and Hospital Central. The program that set Edurne's musical career in motion was the fourth season of Operacion Triunfo. Though eliminated as the show's sixth finalist, Edurne was offered an opportunity to record her first record. On the strength of hit single "Despierta"; the disc, titled Edurne, went on to sell 40,000 copies, hitting number three on national charts. Her rising pop star status made Edurne the face of Herbal Essence's national ad campaign in the summer of 2006, also featuring her single "Amores Dormidos." The popular telenovela Yo Soy Bea commissioned Edurne to record "Te Falta Veneno," which was used as the show's theme song. 2006 ended with Edurne's nomination for Mejor Artista Revelacion by the 40 Principales (a group of radio execs who control international Spanish-speaking airplay). In the summer of 2007, expectant fans enthusiastically embraced Edurne's second record release Ilusión. Ushered in by the radio single "Ven por Mi," the disc debuted at number 13 on national charts. ~ Evan C. Gutierrez, Rovi