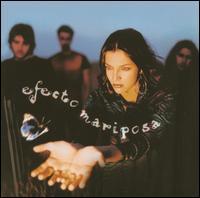 Efecto Mariposa were born in 1997 when Susana Alva (acoustic guitar, voice), Frasco G. Ridgeway (bass, voice), and Raúl Osuna traveled by train from their native Malaga to Madrid chasing down dreams of a career in music. Joined by Alfredo Baón (drums), the band spent the next four years writing material, developing a sound, and creating a network through performance. After a year of solid promotion and national touring, the band released its self-titled debut record with the help of Universal. Efecto Mariposa created significant buzz among Spanish acoustic rock fans, laying the groundwork for the band's solidly successful follow-up. Metamorfosis earned Efecto Mariposa an invitation to tour with Latin pop star Juanes on some of the nation's largest stages. Metamorfosis II was released shortly thereafter, featuring two additional songs. Having satisfied their contract with Universal, Efecto Mariposa decided to produce, record, and even finance their third release, Complejidad. Following the record's release in October of 2005, the Efecto promoted it and toured tirelessly, so much so that the band eventually released a second edition of Complejidad. The band's fourth album, Vivo en Vivo, is expected out in the summer of 2007. ~ Evan C. Gutierrez, Rovi