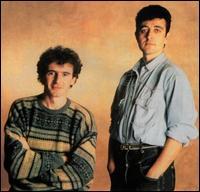 One of Spain's most successful Latin pop bands during the '80s and '90s, El Ultimo de la Fila was formed by Manolo García and Quimi Portet. Manolo had previously played in a band called los Rápidos, along with José Luis Pérez, Luis Visiers, and Antonio Fidel. Quimi had logged some time with Kul de Mandril. When these musicians met in 1982, they decided to start a new project named los Burros, inviting Jordi Vila and Antonio Fidel to join the lineup and signing with an independent label, Belter, soon after. When los Burros broke up, García and Portet continued playing together under a new name, El Ultimo de la Fila.

Combining Latin pop/rock with subtle flamenco influences, the band made its debut with Cuando La Pobreza Entra Por La Puerta, El Amor Sale Por La Ventana, followed in 1986 by Enemigos De Lo Ajeno. A year later, the duo had the opportunity to perform at the Amnesty International show in Barcelona, playing along with international heavyweights like Bruce Springsteen, Sting, and Peter Gabriel. El Ultimo de la Fila continued releasing hit albums in the 1990s and remained a popular concert attraction in Spain and Latin America. The group broke up in January 1998, however, with Manolo García going on to launch a popular solo career. ~ Drago Bonacich & Andrew Leahey, Rovi