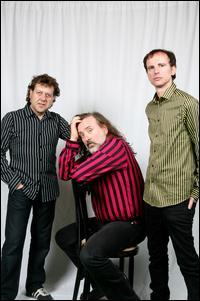 Els Pets are one of the few surviving bands from the short-lived early-'90s phenomenon known as rock català, or Catalan rock. Defined by their love of '60s English pop, particularly the Beatles, and soul music, their records are straightforward, uninhibited, and joyful, with lyrics dealing with universal topics such as love, society, or sex in a free-and-easy style. Singer and guitarist Lluís Gavaldà, drummer Joan Reig, and bassist Falin Cáceres joined up in 1985 and recorded their first cassette demo as Els Pets (which literally translates as "the Farts") a year later. As a result of the spontaneous success of those first homemade recordings, Els Pets enlisted guitar player Ramon Vidal for their eponymous, self-financed debut from 1989. 1991 saw the release of their sophomore album, Calla i Balla, on the label Discmedi, which marked the beginning of an ongoing collaboration with guitarist and producer Marc Grau. The supporting tour included 80 concerts in four months alongside Catalan bands Sau, Sangtraït, and Sopa de Cabra, with multitudinous shows culminating at Barcelona's Palau Sant Jordi. Fruits Sex followed in 1992 with a surge in sales that earned them the Most Popular Band Award from Radio 4 and consolidated them as standard-bearers of rock català. In 1993, Catalan television station TV3 commissioned Els Pets to record a tune for its summer campaign, which the band included on a mini-CD, Cap de Setmana, also incorporating reworkings of old songs. Brut Natural was their 1994 follow-up, voted Best Album of the Year by the channel's audience. That year Els Pets received the National Music Award, the highest recognition from the Catalan government. Coinciding with the band's tenth anniversary, Els Pets released Vine a la Festa (1995), a compilation of live performances from their previous tour, Gira Cua 95, containing four unreleased tracks. Bon Dia hit the stores in 1997 to a warm reception. The catchy, optimistic title tune enjoyed a huge success and the album became a gold record with over 75,000 copies sold. After a one-year sabbatical, Els Pets put out Sol in 1999. The band returned in 2001 with Respira, keeping up with their signature style and everyday topics, though adding more lavish arrangements to their simple verse-chorus-verse approach. A year later the band put together Malacara, another collection of greatest hits. After Agost (2004), Com Anar al Cel i Tornar followed in 2007. ~ Efrén del Valle Peñamil, Rovi