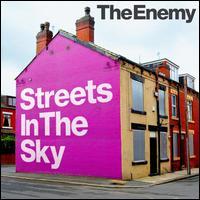 Young gunslingers from the British Midlands who bring together the potent swagger of Oasis with the nervy passion of the Jam, the Enemy became one of the U.K.'s most talked about new bands of 2007 on the basis of a pair of independent singles and some firebrand live shows. Born and raised in Coventry, lead singer and guitarist Tom Clarke, bassist Andy Hopkins, and drummer Liam Watts were only 16 years old when they decided to pool their talents and form a band (though Clarke had started learning to play music when he was four years old and begged his mother for a violin). In 2006, the band started writing songs and within a year they had over 20 original tunes in their repertoire. The Enemy's live gigs caught the attention of the British music press, and the band stuck a deal with the legendary British indie label Stiff Records, who had reopened their doors and were looking for new talent. The Enemy's first single, "40 Days and 40 Nights" (about the annoyances of teenage celibacy), was released in November 2006, and was Stiff's first new 7" since 1988. The single became a modest hit, and their next, "It's Not OK" (released in February 2007), earned rave reviews and "Next Big Thing" predictions from the U.K. music press, as well as impressive sales. Soon the band found themselves opening for the likes of Kasabian and Manic Street Preachers, and they scored a major-label deal with Warner Bros., though the group arranged for Stiff to issue their third single, "Away from Here," which was released in April 2007 and entered the U.K. charts at number eight the same day the band played a sold-out homecoming gig. An album, We'll Live and Die in These Towns, was released by Warner in 2007, followed by a second album, Music for the People, two years later in 2009. Three years would pass before the band reappeared with the release of Streets in the Sky in 2012, which included the singles "Gimme the Sign" and "Saturday", which also appeared in EA Sports' FIFA 12 video game. ~ Mark Deming, Rovi