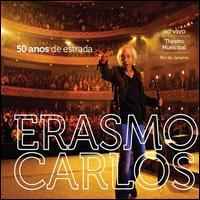 Erasmo Carlos is a historic figure in Brazilian rock, acknowledged by many as the father of Brazilian style. Extremely important as a composer, mainly because of his creations with longtime partner Roberto Carlos, he has been intensively recorded by many top artists. He also has an extensive solo discography. Heavily influenced by rock & roll, he learned his first chords with Tim Maia in 1957. In the same year, he became a member (together with Roberto Carlos) of Maia's seminal band Os Sputniks, a precursor to Brazilian soul music. The next year, he joined the group the Snacks as a vocalist, again with Roberto Carlos. Until the mid-'60s, both performed on radio and TV shows like Os Brotos Comandam (Rádio Guanabara and TV Continental) and Festival de Brotos (TV Tupi), becoming important precursors to the Jovem Guarda movement. From 1965 to 1967, he joined the group Renato e Seus Blue Caps as a vocalist and guitarist. His first composition, "Eu Quero Twist," was recorded by Agnaldo Rayol for Copacabana. His first recording as a singer was in 1962, with "Terror dos Namorados," written with Roberto Carlos. Soon the duo released "Parei na Contramão," and the two hits consecrated them permanently. "Festa de Arromba" (with Roberto Carlos) was a big hit in 1964. In September 1965, TV Record launched the show Jovem Guarda, directed toward their young audience. The show would give birth to the homonymous movement that provoked the precocious demise of bossa nova. In Jovem Guarda, Erasmo Carlos was the Tremendão, and shared the hosting with Roberto Carlos and Wanderléa. Many songs of the duo Roberto/Erasmo became big hits, with "Quero Que Tudo Vá Para o Inferno" being the anthem of a whole generation. Erasmo Carlos' career continued after the end of Jovem Guarda with the recording of many albums and show performances; at the same time, his compositions continued to be recorded by many top artists. In 1968, he made his first appearance in film, in Roberto Carlos em ritmo de aventura, the same year in which he was sued for the corruption of youngsters due to his sensual performances; he was prohibited from performing for two years. In the next year, he appeared in Roberto Carlos e o diamante cor-de-rosa and, in 1970, in A 300 km por hora. In 1972, he was awarded with the Coruja de Ouro trophy for his performance in the film Os Machões (1971). In 1974, he formed the rock band Companhia Brasileira de Rock with guitarist Liminha, saxophonist Yon, bassist Rubão, pianist Sérgio Kaça, and drummer Dinho. This was followed by a performance in the Hollywood Rock Festival and, in 1985, the historic Rock in Rio Festival for 250,000 people. In 1997, he and Roberto Carlos were awarded the Shell prize for the entirety of their works. ~ Alvaro Neder, Rovi