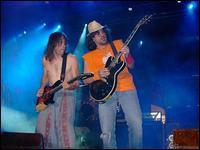 Spanish hard rock band Extremoduro started playing in the late 80s as a threesome, led by singer/guitarist Roberto Iniesta. In January of 1989, the band recorded its first demo tape, Rock Transgresivo, soon playing on a TV show called Plastic and participating in a contest sponsored by Yamaha, which offered them the opportunity to sign up to independent label Avispa and later to Area Creativa. In 1991, the group started working with local label DRO, releasing Deltoya in 1992, with contributions from ex-Tequila guitarist Ariel Rot and Spanish hard rock legend Salvador Domínguez. Following that release came 1993's ¿Dónde Estan Mis Amigos?, 1994's "official" reissue of Rock Transgresivo, and 1995's Pedrá, an experimental record. Extremoduro became a major-label band with the sale of DRO to Warner Music, to whom they have been signed ever since. Three more albums followed in the 90s and three in the noughties, as well as two volumes of greatest hits. Their 1996 effort Agíla remains their most famous, and is often considered their "breakthrough" record, although their rough image and controversial subject matter meant they never enjoyed the fame achieved by some of their contemporaries. Their status as a cult band in the world of Spanish rock is undeniable, however, with major tours in Latin America. Their eleventh studio album, Material Defectuoso, was released in 2011. ~ Drago Bonacich & John D. Buchanan, Rovi