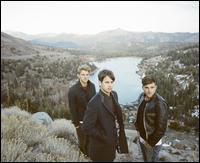 Formed in Los Angeles in 2009 by multi-instrumentalist singer/songwriter Mark Foster, indie rock trio Foster the People made atmospheric, psychedelic, and dance-oriented pop. Foster initially began the project alone, before he added long-term friend Cubbie Fink on bass and drummer Mark Pontius to complete the lineup. The following year, single "Pumped Up Kicks" was posted on their website, picking up considerable buzz online and significant airplay on KROQ, alongside packed performances at Texas music showcase SXSW. This inevitably garnered the attention of the major labels, and eventually the band signed to Columbia imprint Startime International. Early in 2011 they released a self-titled EP that featured "Pumped Up Kicks" -- and with the major-label support the song became a worldwide hit.

Despite the rapid climb of the single, the bandmembers were afforded time to concentrate writing their debut full-length, while "Pumped Up Kicks" grew in popularity and featured on television shows, including the likes of Gossip Girl, Homeland, and a host of commercials. Later that summer the band released its debut record, Torches, which was produced mainly by Greg Kurstin (Kelly Clarkson, Ellie Goulding), with Paul Epworth (Adele, Friendly Fires) also contributing to a handful of tracks. They then embarked on tours across North America and Europe to support its release. In 2012 they took home the Billboard Music Awards' Top Rock Song accolade, and were nominated for a host of others honors, including Grammy, BRIT, NME, and Teen Choice awards.

Foster the People began writing material for their sophomore record while on tour, and they laid tracks down on a portable setup before they entered the studio with Paul Epworth to put the finishing touches to the songs in 2013. They posted a teaser trailer on their website on New Year's Day 2014, and the next day announced that their second album, Supermodel, would be released later that year. ~ Scott Kerr, Rovi