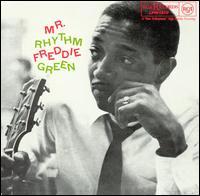 Freddie Green was known throughout his long career as the definitive rhythm guitarist. He rarely soloed (briefly on a few records early on), he stuck to acoustic guitar, and was often more felt than heard. Although he had originally played banjo, Green was playing guitar in New York in early 1937 when producer John Hammond heard him and immediately recommended him to Count Basie. A quick audition and Green had the job, forming a classic rhythm section with Basie, Walter Page, and Jo Jones. After 13 years with the orchestra, Green was not originally included in Basie's small group in 1950, but one night sat down uninvited on the bandstand and never left. He stayed with the band even after its leader's death, making a recording with Dianne Schuur and the Frank Foster-led orchestra in 1987, shortly before he passed on after nearly 50 years of service. Freddie Green also composed "Corner Pocket" (later renamed "Until I Met You" for the vocal version) and "Down for Double." ~ Scott Yanow, Rovi