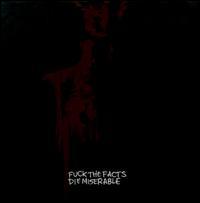 Based in Quebec, Canada, experimental grindcore outfit Fuck the Facts was originally conceived in 1997 as a nameless studio project by guitarist/vocalist Topon Das; but it would take several tape releases and three years before he issued the first official CD, Discoing the Dead, under the band's eventual, provocative name. 2001 saw the emission of a second LP, entitled Mullet Fever, by a new lineup featuring Das, guitarist Tim Audette, drummer Matt Connell, and vocalist Brent Christoff, but the latter was soon replaced by vocalist Mel Mongeon, whose fearsome vocal eruptions have been a Fuck the Facts trademark ever since 2002's Backstabber Etiquette. So too has been the band's habit of constantly swapping drummers and second guitarists, while sporadically touring in both Canada and the U.S., and releasing literally dozens of split tapes and EPs on a yearly basis. In fact, these were so predominant on the band's priority list, it wasn't until 2006 that another proper LP, named Stigmata High-Five, was made available through Relapse Records. ~ Eduardo Rivadavia, Rovi