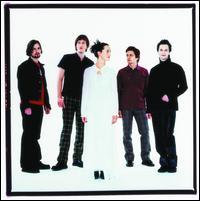 Adding modern touches to traditionally based Swedish folk music has made Garmarna one of top groups of the Scandinavian Folk resurgence of the '90s. Their debut album, 1994's Vittrad, was nominated for a Swedish Grammy while their second album, 1996's Guds Speleman, received the Swedish Grammy award "Album of the Year." Released in the United States, the album placed high on the CMJ New Music chart. In late 1996, Guds Speleman reached the fifth posotion on a Top 25 list compiled by the Canadian Broadcasting Corporation and Societe-Radio Canada. Their third effort, Vedergällningen (Vengeance), released in March 1999 reached number eight on the European world music chart.

Formed in 1990, Garmarna was inspired by Olov Johansson's musical score for a production of Shakespeare's Hamlet. Initially a trio featuring Gotte Ringqvist, Stefan Brisland-Ferner, and Rickard Westman, the group quickly built a solid local reputation. An interview with a radio reporter following their set at the Umea Folkmusik Festival led to an invitation to perform at a major festival in Autsfred, Sweden. The festival performance proved pivotal. Drummer Jens Hoglin, who was added for the festival, has remained with the group. Audience members included Emma Hardelin, who subsequently joined the band as lead vocalist, and Mats Hammerman, president of the Massproduktion record label, who quickly signed the group. Soon after releasing an EP in 1993, Garmana began touring throughout Sweden. The following year, the band caught the ear of Drew Miller, bassist of Minneapolis-based band Boiled in Lead and the owner of an independant label, Omnium. Impressed by what he heard, Miller signed Garmarna for North American distribution. Their debut album, Vittrad, released in Sweden in April 1994, was reissued as Crumbling Away. Garmarna performed their debut North American tour in March 1995. In Autumn 1996, Garmarna received the prestigious jury's prize, the Iron Gustav Award, for their performance at the Malzhaus Festival in Germany. Garmarna later performed a song by Mats Wester and Py Bäckman at the Eurovision Song Contest. During a tour in 1998, the group performed a collection of songs based on the medieval work of Hildegard von Bingen. Emma Hardelin performed songs by Benny Andersson of ABBA during a show that was broadcast throughout the world on New Year's Eve 1999. Vengeance was issued that same year. A self-titled release also appeared two years later. ~ Craig Harris, Rovi