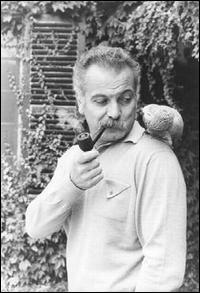 One of French pop's most poetic songwriters, Georges Brassens, was also a highly acclaimed and much-beloved performer in his own right. Not only a brilliant manipulator of language and a feted poet in his own right, Brassens was also renowned for his subversive streak, satirizing religion, class, social conformity, and moral hypocrisy with a wicked glee. Yet beneath that surface was a compassionate concern for his fellow man, particularly the disadvantaged and desperate. His personal politics were forged during the Nazi occupation, and while his views on freedom bordered on anarchism, his songs expressed those convictions more subtly than those of his contemporary, Léo Ferré. Though he was a skilled songwriter, Brassens had little formal musical training, and he generally kept things uncomplicated -- simple melodies and spare accompaniment from a bass and second guitar. Along with Jacques Brel, he became one of the most unique voices on the French cabaret circuit, and exerted a tremendous influence on many other singers and songwriters of the postwar era. His poetry and lyrics are still studied as part of France's standard educational curriculum.

Georges Brassens was born in the small Mediterranean town of Sète, France, on October 22, 1921. His deeply religious mother encouraged him to play the mandolin, and taught him some of the Italian folk songs she'd grown up with; intellectually, however, Brassens wound up taking after his staunchly anti-religion father. Around age 15, Brassens met Alphonse Bonnafé, the literature teacher who first introduced him to poetry (and would later write the first Brassens biography in 1963). Brassens soon spent his free time writing poetry and song lyrics, the latter of which he typically set to popular melodies of the time. He also formed a small musical group called Jazz, which played local functions with Brassens as the drummer. Unfortunately, Brassens was expelled from school in 1939 after inadvertently getting mixed up in a jewel theft on campus. He first went to work for his father's masonry business, then went to Paris in 1940 to live with his aunt and work at the Renault car factory. In the meantime, he learned piano and wrote some of his first original compositions.

When Nazi troops arrived in Paris that summer, Brassens returned to Sète for a few months, but found it difficult to remain there. He was back in Paris by year's end, and despite the Nazi occupation, he managed to publish two short poetry collections in 1942. In 1943, Brassens was conscripted into the S.T.O., a mandatory work service program that forced him to go to Germany; there he met Pierre Onténiente, a fellow Frenchman who would become his lifelong friend and (in his successful years) private secretary. After a year in the S.T.O., Brassens returned to Paris on a two-week leave; rather than go back to Germany, he went into hiding at the home of a couple, Jeanne and Marcel Planche, whom he would later immortalize in song. Without much else to occupy him, Brassens spent his days composing songs and writing music, eventually teaching himself the guitar based on his prior experience with the mandolin.

In 1946, after the war had ended, Brassens published the first of a series of articles in the anarchist journal Le Libertaire. The following year, he also published his first novel, La Lune Écoute Aux Portes, and met Joha Heiman, the woman he would love -- and write about -- for the remainder of his life (oddly, they never married or even cohabited, as Brassens continued to live with the Planches until 1966). Brassens wrote much of his finest early work during the next few years, but found it difficult to place his material with anyone on the Parisian cabaret circuit. His luck started to change in 1951 when he met singer Jacques Grello, who helped him find performers for his songs; however, none proved especially popular with audiences at first.

In early 1952, Brassens auditioned a selection of his material for female cabaret star Patachou, giving a late-night performance that dazzled the small audience present. Though Brassens had never considered himself a singer, Patachou convinced him to try his hand at performing himself. A bass player present at the audition, Pierre Nicolas, quickly joined Brassens in support, and would serve in that capacity for the remainder of the singer's career. Brassens was an immediate hit on the cabaret circuit with both audiences and critics, and with Patachou's help, he met Polydor exec Jacques Canetti, and landed a record deal. His first single, "Le Gorille," was released later in 1952, and stirred up controversy with its strong anti-death penalty stance; in fact, it was banned from French radio until 1955.

In 1953, Brassens released his first LP, La Mauvaise Réputation, and played his first major concert at the Bobino Theatre, to which he would return often in the years to come; he also published a second novel, La Tour des Miracles. He won the prestigious Grand Prix du Disque de l'Academie Charles Cros in 1954 for his EP Le Parapluie, and spent much of the year touring Europe and northern Africa. He released several more LPs over the remainder of the '50s, during which time chronic kidney ailments began to affect his health, resulting in periodic hospitalizations. Nonetheless, he continued to tour regularly, and made his film debut in 1956's Portes des Lilas; he also set some of his friend Paul Fort's poetry to music.

Brassens' early-'60s LPs included strong works like Le Pornographe, Le Mécréant, and Les Trompettes de la Renommée. In 1964, he wrote the hit theme "Les Copains d'Abord" for the film Les Copains, and issued an album of the same name. His prolific writing pace of the '50s slowed considerably afterward, due in part to health problems and personal tragedies (both his parents and the Planches had passed away by the end of the decade). These experiences informed his increasingly morbid lyrical outlook, typified by his 1966 LP Supplique pour Être Enterré à la Plage. However, the remainder of the '60s was not all unkind to Brassens; he was awarded the Grand Prix de Poésie de l'Academie Française (the highest national poetry award) in 1967, and took part in a celebrated three-way radio interview with Jacques Brel and Léo Ferré in 1969. Also in 1969, he returned with the new album La Religieuse, which featured his new second guitarist, Joel Favreau, the third musician to hold that chair (the first two were Victor Apicella and Barthelemy Rosso).

Brassens spent the early '70s working on several film soundtracks, and performing several well-received concert series at the Bobino Theatre; he also issued a new album, Fernande, in 1972. Weakened by his kidney problems, he embarked on his final tour in 1973. He issued one further LP, Don Juan, in 1976, and gave a series of farewell concerts in early 1977 at the Bobino. Brassens would return to the studio on several other occasions as a star guest for others' recording sessions, but by 1980, his kidney problems had worsened into cancer. He passed away on October 29, 1981, in the village of Saint-Gely-du-Fesc, at his doctor's home, and was buried nearby in his hometown of Sète. ~ Steve Huey, Rovi