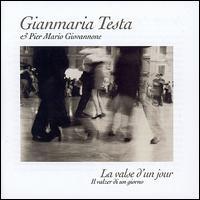 At the beginning of his career, Italian guitarist and singer Gianmaria Testa, who is often likened to compatriot Paolo Conte due to their similar, gruff-sounding voices and origins in the Piedmonte province of Italy, had much more success in the French market than in his native country. The self-taught musician, who wrote his first song at 13, was discovered by producer Nicole Courtois in 1994 after Testa had won consecutive top prizes at the Recanti Festival, an annual singer/songwriter competition. In 1995, his debut album, Montgolfières, came out on France's Label Bleu, followed the next year by Extra-Muros, the first release on Warner France imprint Tôt ou Tard.

In 1997, Testa began to receive recognition in his homeland, and by 1999, the year he had a European tour and released his third record, Lampo, he was fully respected and appreciated in Italy and played at its top venues. In 2000 Il Valzer di un Giorno (known worldwide as La Valse d'un Jour), a collection of songs and poetry, came out, and in 2003 Testa issued Altre Latitudini, which saw American soil in 2004. Despite the success the singer had found -- Tôt ou Tard even remastered and released Extra-Muros in 2005 -- Testa never quit his day job as station master at the train station in Cuneo, Italy, and was careful to schedule tour dates only when he knew his co-workers wouldn't be taking vacations. ~ Marisa Brown, Rovi