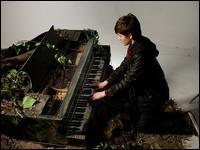 In April 2010, 12-year-old Greyson Chance performed Lady Gaga’s “Paparazzi” at a middle-school talent show, accompanying himself on the piano while his sixth grade classmates watched. A video of the performance was uploaded to YouTube later that month. One of its earliest viewers was Ellen DeGeneres, who invited Greyson to perform on her show in May and eventually signed him to eleveneleven, her newly launched record label. A major-label deal with Interscope followed. By June, the “Paparazzi” video had racked up more than 30 million views on YouTube, and Greyson released his debut single, “Waiting Outside the Lines,” before the year was up. The full-length Hold on 'Til the Night followed in 2011, cracking the Top 40 during its first week of release. ~ Andrew Leahey, Rovi