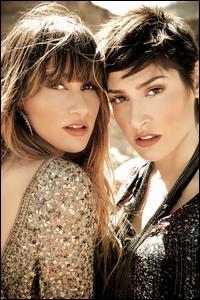 Hanna and Ashley Perez Moza were born in Lake Charles, LA. From a young age, they both felt a strong pull toward a life in music. They began singing in their home church at the ages of five and six. The girls were met with such a strong reception that they began to perform regularly. In doing so they began taking their craft more seriously, and sought out professional instruction. Winning local competitions, followed by regional festival invitations in their early teens, created a buzz around Hanna and Ashley. Their first demo recording soon fell into the hands of A&R at Sony Music. Impressed with the talented adolescents' mix of rock, pop, and country, Sony signed the ladies, calling them Ha*Ash. Their self-titled debut album, under the direction of Aureo Baqueiro, was released in 2003. The record's first single, "Odio Amarte," was a radio hit all over the country, and opened doors for important live and television appearances. Among those opportunities was the recording of the musical theme for the animated film Magos y Gigantes. A number of hit singles later, Ha*Ash were pleased to see their first record go platinum, selling better than 140,000 copies. A year later, the girls released their second album, entitled Mundos Opuestos. ~ Evan C. Gutierrez, Rovi