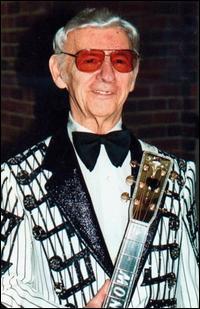 Canada's greatest contribution to country music, Hank Snow was famous for his "traveling" songs. It's no wonder. At age 12 he ran away from his Nova Scotia home and joined the Merchant Marines, working as a cabin boy and laborer for four years. Once back on shore, he listened to Jimmie Rodgers records and started playing in public, building up a following in Halifax. His original nickname, the Yodelling Ranger, was modified to the Singing Ranger when his high voice changed to the great baritone that graced his hit records. In 1950, the year he became an Opry regular, his self-penned "I'm Moving On" (the first of his many great traveling songs) became a smash hit, reaching number one and remaining there for 21 weeks. "Golden Rocket" (also 1950) and "I've Been Everywhere" (1962), two other hits, show his lifelong love for trains and travel. But he was as much at home with two other styles, the ballad and the rhumba/boogie. Among his many great ballads are "Bluebird Island" (with Anita Carter of the Carter Family), "Fool Such as I," and "Hello, Love," a hit when Snow was 60 years old. Snow appeared regularly on the Opry into the '90s, proving that his incredible voice suffered no loss of quality over the last half-century, as well as what a tasteful, understated guitar stylist he is. With small stature and huge voice, Snow was a country traditionalist who gave much more to the business than he took.

Born and raised in Nova Scotia, Snow (born Clarence Eugene Snow) moved in with his grandmother when he was eight years old, following the divorce of his parents. Four years later, he re-joined his mother when she re-married, but his stepfather was an abusive, violent man who frequently beat Hank. Tired of the abuse, Snow ran away from home when he was 12 years old, joining a fishing boat. For the next four years, he served as a cabin boy, often singing for the sailors onboard. When he was 16, he returned home, where he began working odd jobs and trying to launch a performing career. His mother had given him a stack of Rodgers records which inspired him greatly. Within a few weeks of hearing Rodgers, Snow ordered a cheap, mail-order guitar and tried to learn his idol's trademark blue yodel. For the next few years, he sang around Nova Scotia before finally mustering the courage to travel to Halifax in 1933. Snow landed a weekly unpaid appearance on CHNS' Down on the Farm, where he was billed as both the cowboy Blue Yodeller and Clarence Snow and His Guitar. The following year, CHNS' chief announcer, Cecil Landry, suggested to Snow that he should change his name to Hank, since it sounded more Western.

Snow continued to perform in Halifax for the next three years, often struggling to get by. The severity of the financial situation was compounded when he married Minnie Aalders in 1936, but the couple was soon relieved when he landed a regular paid program on the network Canadian Farm Hour, billed as Hank the Yodelling Ranger. By the end of the year, Snow had signed a deal with RCA Victor's Montreal branch and recorded two original songs: "The Prsoned Cowboy" and "Lonesome Blue Yodel." The songs were hits, beginning a string of Canadian-only hit singles that ran for the next ten years; during that time, he recorded nearly 90 songs. In the early '40s, he had a regular show on CBC, based in Montreal and New Brunswick. In 1944, he switched to CKCW in New Brunswick. Around that time, he switched his stage name to Hank the Singing Ranger, since his voice had deepened and he could no longer yodel.

Though he had become a star in Canada, the American market remained untapped. Snow tried to break into the U.S.A. several times, playing The Wheeling Jamboree in West Virginia, briefly moving to Hollywood, and performing concerts with his trick pony Shawnee, but he was having no luck finding fans. The problem partially lies with the fact that he was trying to find an audience that wasn't there, since most citizens were concentrating on World War II. Another stumbling block was RCA Records themselves, who refused to let Snow release records in America until he was well-known in the country. By 1948, Snow was singing on The Big D Jamboree in Dallas, TX, where he befriended the honky tonk legend Ernest Tubb. Tubb pulled enough weight at the Grand Ole Opry to get Snow a slot on the show in early 1950, and by that time, RCA had agreed to record him for the American audience.

Snow's American debut single, "Marriage Vow," became a minor hit at the end of 1949, but it fell off the charts after a week. Similarly, his debut appearance at the Grand Ole Opry in January was not well-received, prompting him to consider moving back to Canada. However, those ideas were soon abandoned when his breakthrough arrived in the summer of 1950. That July, "I'm Moving On" began its remarkable ascent up the charts, eventually landing at number one and staying there for a full 21 weeks. In the year after the release of "I'm Moving On," "The Golden Rocket" and "The Rhumba Boogie" both hit number one (the latter staying there for eight weeks), establishing Snow as a genuine star. Between 1951 and the end of 1955, Snow had a remarkable 24 Top Ten hits, including the massive hit single "I Don't Hurt Anymore," which spent 20 weeks at number one in 1954. Snow not only played his trademark traveling songs, but also country boogie, Hawaiian music, rhumbas, and cowboys songs. By the middle of the decade, he was a star not only in the United States and Canada, but throughout the world, gaining a particularly strong following over the years in the United Kingdom.

Around 1954, Snow formed a booking agency with Colonel Tom Parker, who would later become infamous for being Elvis Presley's manager. Indeed, Snow played a formative role in Presley's early career, convincing the Grand Ole Opry to give the singer a chance in 1954. Though Elvis' appearance at the Opry was ill-received, Snow continued to push Presley to move toward country, and Hank was quite upset when Parker took complete control of Elvis' management around 1955. Still, Snow found a way to combat rock & roll -- he recorded some light rockabilly singles himself. "Hula Rock" and "Rockin', Rollin' Ocean" were attempts to capture the beat of rock & roll but diluted with the rhumbas and boogie that made his singles hits during the early '50s. Though he was experimenting with the new genre, he hadn't abandoned country and he continued to regularly chart in the country Top Ten until 1965 with hits like "Big Wheels" (number seven, 1958), "Miller's Cave" (number nine, 1960), "Beggar to a King" (number five, 1961), "I've Been Everywhere" (number one, 1962), and "Ninety Miles an Hour (Down a Dead End Street)" (number two, 1963).

During the latter half of the '60s, Snow's career slowed down considerably, as he wasn't able to make the transition to the new, heavily orchestrated country-pop sounds, nor was he able to keep pace with the twangy roll of Bakersfield. Instead, his singles placed in the lower reaches of the charts, while his concerts and Grand Ole Opry appearances continued to be quite popular. It wasn't until 1974 that another monster hit arrived in the form of "Hello Love," which unexpectedly climbed to number one. Instead of sparking a revival, "Hello Love" proved to be a last gasp; between its release in 1974 and 1980, Snow had only two other Top 40 hits, which both arrived the same year as "Hello Love." Despite his declining record sales, his profile remained high through his concerts and several lifetime-achievement awards, including his induction to the Nashville Songwriters International Hall of Fame in 1978 and the Country Music Hall of Fame in 1979.

In 1981, Snow's recording career ended when RCA dropped him after a 45-year relationship. Snow was very upset with the label's treatment of him, as well as the direction that country music was taking, claiming that "80 percent of today's country music is a joke and not fit to listen to." He was equally angry that country's roots were being diluted by pop and rock production values. Though he never recorded again, Snow remained active in the Grand Ole Opry into the '90s, and he spent a lot of time working for his Foundation for Child Abuse. In the late '80s, Bear Family began a lengthy retrospective of several multidisc box sets that chronicled his entire recording career. In 1994, Snow published his autobiography, The Hank Snow Story. Late the following year, he was stricken with a respiratory illness, yet he recovered in 1996, returning to the Grand Ole Opry in August of that year. Snow died December 20, 1999, at the age of 85. ~ David Vinopal, Rovi