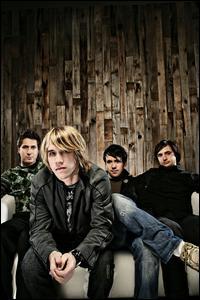 That fall, the band co-starred in an episode of the NBC drama American Dreams, portraying the Who and delivering a performance of "My Generation." Clark and Paige exited the lineup soon after, and with new guitarist Jonathan Steingard and drummer Aaron "Sqwid" Tosti filling out the roster, Hawk Nelson made a cameo appearance in the 2005 Hollywood family film Yours, Mine & Ours, performing their song "Bring ‘Em Out." Their sophomore LP, Smile, It's the End of the World, followed in the spring of 2006.

The album proved to be a popular Christian album, peaking at number three on the Christian charts and earning a GMA Dove Award nomination. However, it was the band's next release -- Hawk Nelson Is My Friend -- that turned Hawk Nelson into stars. Released in April 2008 (and featuring new drummer Justin Benner,) the album topped the Billboard Christian Albums chart and peaked at number 34 on the Hot 100. It also marked one of the first times Hawk Nelson had worked with co-writers, other than Trevor McNevan, with both Richard Marx and Raine Maida lending their own contributions to the track list. Live Life Loud! followed in 2009, and Hawk Nelson returned to their fast, punky roots with their fifth album, 2011's peppy Crazy Love. Later that year, the band delivered a dose of holiday cheer with a Christmas EP, which found the band merging their exuberant sound with some seasonal standards. In early 2012, Dunn left the band, leaving Steingard to take over on lead vocals on their next album, 2013's Made. ~ Jason Ankeny, Rovi