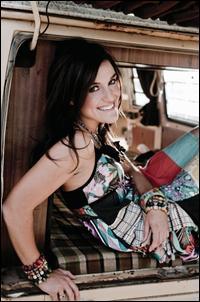 Providing a distaff version of the easygoing, sun-and-surf folk-rock of Jack Johnson or Ben Harper, Hayley Sales also rates comparison to more musically expansive alternative folkies like Erin McKeown and even Suzanne Vega. The daughter of a recording engineer, Hayley Sales was born in Washington, D.C., and raised near Portland, OR. Although Sales taught herself to play piano and guitar starting at the age of eight, she attended a performing arts school in Portland with an eye toward becoming an actress. After stints in local and regional theater companies, Sales moved to Los Angeles to pursue an acting career in earnest, but health problems necessitated a move back to her parents' home, which at this time was an organic farm growing blueberries on Vancouver Island in British Columbia. She began working with her father, Richard Sales, in his recording studio on the farm, learning the basics of engineering and studio management while writing her own songs. After a self-released demo CD, The Drifter, attracted the attention of a management company, Sales signed to Universal Records in 2006. Sunseed, Sales' first album for Universal, was released in the summer of 2007, featuring production and instrumental work by her father. ~ Stewart Mason, Rovi