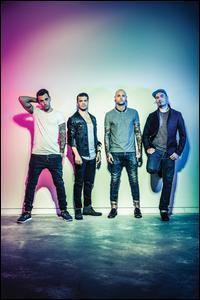 The Vancouver punk-pop quartet Hedley are led by frontman Jacob Hoggard, who first rose to national prominence as a finalist during the 2004 season of the television talent contest Canadian Idol. Though voted off the series in its penultimate episode, Hoggard proved a major fan favorite, guaranteeing significant media exposure for his subsequent pursuits. In 2005, he formed Hedley with guitarist Dave Rosin, bassist Tommy Mac, and drummer Chris Crippin, all of whom previously teamed in the Vancouver band Everything After. The band generated a healthy buzz at the Canadian Music Week 2005 media showcase and, soon after, signed a demo deal with Universal Music Canada. After Hedley cut three songs with producer Brian Howes, the label extended an LP deal, and the band's self-titled debut followed that fall, generating the radio hits "Trip" and "On My Own." The album quickly went platinum as a third single ("321") entered heavy video rotation on MuchMusic, and Hedley spent the summer of 2006 supporting Yellowcard and Matchbook Romance on a North American tour before their album hit U.S. stores in September. The band's popularity in Canada didn't translate into American success, however, and Hedley returned home to work on a sophomore effort with several co-writers. Largely recorded in the beachfront community of White Rock, British Columbia, Famous Last Words arrived in October 2007. The dance-punk-infused The Show Must Go followed in 2009. Also that same year, the band released the singles compilation Never Too Late. In 2010, Hedley released the live CD/DVD Go with the Show. ~ Jason Ankeny, Rovi