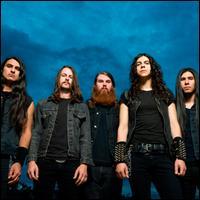 A revivalist metal act born out of a revivalist metal act, Holy Grail was formed by former White Wizzard members James Paul Luna (vocals), Tyler Meahl (drums), and James J. LaRue (guitar), in 2008. Evoking the crunching, riff-driven sound of classic death metal, the Pasadena, California band takes listeners back to a less complicated, more denim-heavy time. Filling out the lineup with guitarist Eli Santana and bassist Blake Mount, the band released their debut EP, Improper Burial, in 2009 before heading out on the road in support of bands like Amon Amarth and fellow metal classicists 3 Inches of Blood. The following year, the band parted ways with LaRue, who was replaced with Ian Scott. The year also found the band making their full-length debut with Crisis in Utopia. Scott's time with Holy Grail would be short-lived, with the axeman leaving the band in 2011, and guitarist Alex Lee stepped in to take his place. Keeping with the tradition of releasing an album after replacing a guitarist, Holy Grail released an EP, Seasons Bleedings, later that year after touring with Toxic Holocaust. The sophomore full-length, Ride the Void, arrived in 2013. ~ Gregory Heaney, Rovi