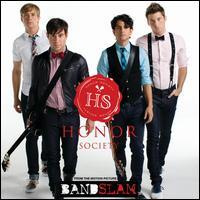 Mixing adult savvy with the R&B-influenced songcraft of teen pop, Honor Society began making headlines in 2009 via a series of connections with the Jonas Brothers. Drummer Alex Noyes had previously performed in the Jonas Brothers' backing band, and the siblings maintained an interest in Noyes' musical projects after he left the lineup. Meanwhile, singer/guitarist Michael Bruno, keyboardist Jason Rosen, and bassist Andrew Lee toured the New York City club circuit under the name "Airborne", although the departure of their drummer (not to mention a potential lawsuit from the similarly named Airbourne, an Australian heavy metal group) convinced the group to make some changes. Noyes soon climbed aboard as a replacement drummer, and the revised band -- now known as Honor Society -- sent their debut EP to the Jonas Brothers. Within a year, they had signed to the Jonas Brothers' label, toured the country as the band's opening act, and contributed music to the popular movie Bandslam, all the while preparing for the release of their debut album, 2009's Fashionably Late. In 2011, the band followed up its 2008 ep with A Tale of Risky Business, Pt. 2. ~ Andrew Leahey, Rovi