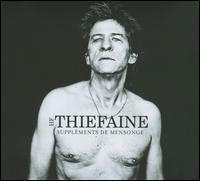 French singer/songwriter Hubert-Félix Thiéfaine is an artist whose work one may find very difficult to file in any genre. Influenced by Bob Dylan and Lou Reed as well as Léo Ferré, Jacques Brel, and French writers, his music first took shape as a form of folk-rock, turning darker and more synthetic in the '80s and constantly evolving with time into a quite personal style of pop featuring poetic, daring, and sometimes difficult lyrics. Never submitting to musical fashion or ideology, Thiéfaine's work might be considered just as original as that of Jacques Higelin or Gérard Manset, expressing a conflicted and sometimes odd personality. Although Thiéfaine has opted out of the mass-media music business since the beginning of his career in 1978, he has managed to attract a large and faithful audience, selling more records and concert tickets than one might imagine given the level of his exposure, and gaining cult status along the way.

Hubert-Félix Thiéfaine was born in Dole, Jura, in 1948. Having had a quite unhappy childhood, he quickly encountered issues at school. Developing a great deal of imagination at that time and already with a rebellious streak, he started writing songs with a couple of friends at the early age of 12. He later managed to make it through university, where a friendly collaboration with the folk-influenced Tony Carbonare began.

In 1996 and 1998, he released two new sets of material like two parts of a diptych, La Tentation du Bonheur and Le Bonheur de la Tentation. After 2001's Defloration 13, 2005's Scandale Mélancolique saw Thiéfaine collaborate with famous young artists like Cali and J.P. Nataf, stepping out somewhat uncharacteristically with his most visible comeback to date. In 2007, a Scandale Mélancolique tour DVD was released and released the compilation Sequels in 2009. After a four year hiatus he released his sixteenth studio album Supplement de Mensonges in 2011. ~ Olivier Duboc, Rovi