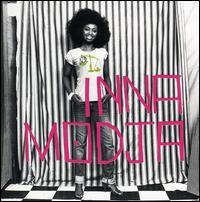 Mentored by legendary world musician Salif Keita, Malian vocalist Inna Modja later abandoned the music of her African roots in favor of a commercial soul-pop sound inspired by her globe-trotting background. Born Inna Bocoum in Bamako, Mali in 1984, she was given her stage name (meaning "naughty girl") by her mother, who enrolled her in a choir at the age of five. Inspired by both her parents' Otis Redding, Ella Fitzgerald, and Ray Charles record collection, and her six siblings' love of hip-hop, disco, and heavy metal, she decided to pursue a career in music, performing as a backing vocalist for the Rail Band de Bamako before relocating to Paris, via Nigeria, Togo, and the U.S., with her family. In 2009, she signed to Up Music and released her debut album, Everyday Is a New World, following it up with sophomore outing Love Revolution and its hit single, "French Cancan," in 2011. ~ Jon O'Brien, Rovi