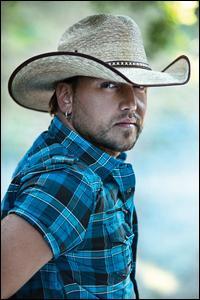 Country singer and guitarist Jason Aldean was born in Macon, Georgia, in 1977. His parents separated when he was three years old, and he spent his childhood with his mother in Macon through the school year while spending the summers with his father in Homestead, Florida. He fell early under the spell of country music and made his first public appearance as a singer at a VFW hall in Macon when he was 14 years old. Soon he was a regular at area talent contests, and a year later he joined the house band at Nashville South in Macon. Aldean began pursuing a music career on a full-time basis following his graduation from high school and, with his father as a booking agent, was soon gigging in college towns throughout the Southeast and up and down the Eastern Seaboard.

Aldean privately financed an eight-song CD during this period to sell at shows, recording it in Nashville in 1996. Michael Knox spotted Aldean at an Atlanta showcase a year or two later, and signed the singer to a songwriting contract with Warner-Chapell Publishing, which allowed Aldean to move to Nashville in 1998. When a couple of recording deals fell through and his songwriting contract was about to expire, Aldean was on the verge of giving up on the music business when he attracted the attention of the independent label Broken Bow Records, which released his debut album, simply called Jason Aldean, in 2005. Aldean returned to the studio in January 2007 to work on his sophomore release, Relentless. The album, featuring the single "Johnny Cash," hit stores in May of that year.

Wide Open followed in 2009 and its success established Aldean as a major country star. It had three number one singles -- "She's Country," "The Truth," "Big Green Tractor," which crossed over to the pop Top 20 -- and "Crazy Town" was nearly as big, peaking at number two. Aldean upped the ante with 2010's My Kinda Party, an album that was even bigger than its predecessor thanks to the number one singles "Don't You Wanna Stay," "Dirt Road Anthem," and "Fly Over States," plus "Tattoos on This Town" and "My Kinda Party," both of which peaked at number two. All of this raised expectations for Night Train, Aldean's fifth album, which arrived in the fall of 2012. ~ Steve Leggett, Rovi