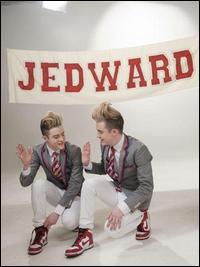 Reality TV has helped launch many musicians, but few have been as controversial as Jedward, an Irish rap/dance/pop duo that achieved notoriety during the sixth season of The X Factor. Twin siblings John and Edward Grimes joined the show's cast in October 2009, just several weeks shy of their 18th birthday. They quickly became known for their dance routines, towering hairdos, and -- according to some media outlets -- a surprising lack of singing talent. Vocally gifted or not, they stayed with the competition for more than a month, eventually finishing in sixth place and earning the approval of X Factor judge Louis Walsh, who became the boys' manager.

With Walsh's help, Jedward signed a contract with Sony Music and released their first single, a mashup of "Under Pressure" and "Ice Ice Baby," in early 2010. The song topped the charts in Ireland and peaked at number two in the U.K., although it dropped to number 12 the following week and eventually slumped off the U.K. charts entirely. Sony responded by dropping the band from its roster, making Jedward one of the few groups to lose a record contract on the basis of one song. The twins quickly rebounded, signing a three-album deal with Universal the very next day and rush-releasing their debut album, Planet Jedward, which appeared in July. A covers album, Planet Jedward found the duo reworking various pop, rock, and R&B hits of the past. It sold well, peaking at number one on the Irish album charts and number 17 on the U.K. album charts.

After Jedward's Bad Behavior Tour ended in 2011, the brothers competed as housemates on the U.K. reality TV game show Big Brother 8, in which they finished in third place. Also in 2011, Jedward represented Ireland in the Eurovision Song Contest with the single "Lipstick," ultimately finishing in eighth position. In 2012, Jedward once again represented Ireland in the Eurovision contest with the song "Waterline." That same year, they released their third studio album, Young Love. ~ Andrew Leahey, Rovi