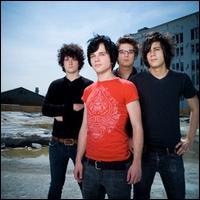 Jet Lag Gemini may have gotten together in the punk hotbed of Bergen County, NJ, but the pop/rock quartet's members actually represent three countries among them. Lead vocalist/guitarist Misha Safonov is from Russia; drummer Dan DiLiberto represents the United States; and brothers Matei and Vlad Gheorghiu (bass and lead guitar, respectively) are natives of Romania. Formed when everyone was still well under the U.S. legal drinking age, Jet Lag Gemini played their first show in March 2003. The guys continued to book and organize a plethora of shows, sharing the stage along the way with bands like the Matches, Halifax, Punchline, and Socratic, among others. Jet Lag Gemini signed with Doghouse Records in April 2006, and their summer-ready debut EP, Business, appeared early that June. A summer of touring subsequently preceded the January 2008 release of Fire the Cannons. ~ Corey Apar, Rovi