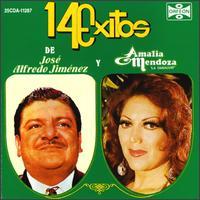 José Alfredo Jiménez was the undisputed king of ranchera, the melodramatic and sentimental singing style that originated in the cities of Mexico during the 1950s and '60s. Jiménez began his musical career at the age of ten when his parents' death resulted in his leaving school and starting a musical group with a friend, Jorge Gabilondo Patiño. In the late '40s, Jiménez formed a trio, Los Relendes, with brothers Enrique and Valentin Ferrusca. The group's first break came when they were hired to become regular performers on Mexican radio station XEW. In addition to performing with the trio, Jiménez sang with such top-ranked Mexican artists as Jorge Negrete, Pedro Infante, Pedro Vargas, and Miguel Aceves Mejia. In 1950, Jiménez's composition "Yo" was recorded by Andres Huesca y Sus Costenos. The success of the song resulted in Jiménez meeting with Mariano Rivera Conde, who booked Los Relendes to perform at his club. The trio's appearance was a major success, and the group became extremely popular with a young audience. After the breakup of Los Relendes in 1953, Jiménez continued to write songs about the joys of drinking tequila and the violence of bad relationships. His best-known tunes include "Ella," "Cuatro Caminos," "La Que Se Fue," and "Guitteras de Media Noche." In 1968, Jiménez was diagnosed with cirrhosis of the liver. He died in a Mexican hospital in November 1973. Vicente Fernandez has recorded several albums of Jiménez's compositions. ~ Craig Harris, Rovi